Comedian Bill Maher slammed the leftist media for “scaring the s**t” out of people during the pandemic by constantly spreading fear. The New York Post reports, during a recent appearance on ABC’s “Jimmy Kimmel Live!” the 65-year-old television host referenced a study in the New York Times, “which is a liberal paper, so they weren’t looking for this answer,” Maher said.

He continued, “The question was, ‘What do you think the chances are that you would have to go to the hospital if you got Covid?’ And Democrats thought that was way higher than Republicans. The answer is between 1% and 5%.” Maher explained the study, saying that 41% of Democrats believed it was over 50%, while 28% believed it was between 20% and 49% of Covid patients who end up going to the hospital.

Bill Mahr went on Jimmy Kimmel and blasts liberal media, saying they’re are scaring the s–t out of people about Covid and they need to take responsibility for spreading lies. pic.twitter.com/u8XNSUbO6N

Maher then noted the difficulty of touring as a comedian, saying, “The reason why I’m bringing this up is because it’s much harder for every touring act to sell tickets in blue states. They’re afraid to go out of the house. In red states, it’s all good to go.” Maher also said he caught Covid-19 after being vaccinated, does not want a booster shot, and that he only got the vaccine to “take one for the team.” He continued, saying that the vaccine was probably not necessary for many young people.

Maher then took a jab at Kimmel and Howard Stern for their overzealous stance on the vaccine saying, “I know you and your boyfriend, Howard Stern, are very paranoid about this, but it’s a little weird that I got it after, but now many, many, many people have had the same situation.”

“Fuck their freedom. I want my freedom to live” Howard Stern pic.twitter.com/dmAyq0pX0Z

Stern, a vaccine mandate advocate, recently said, “When are we going to stop putting up with the idiots in this country and just say, you know, it’s mandatory to get vaccinated?” Stern asked. “F**k them, f**k their freedom. I want my freedom to live. I want to get out of the house already. I want to go next door and play chess. I want to go take some pictures.”

“Vaccinated person having a heart attack: Yes, come right on in. We’ll take care of ya.

Kimmel was also recently quoted taking an extreme stance on Americans who choose not to get the Covid vaccine. After Labor Day, on his return from summer vacation, Kimmel stated, “Dr. Fauci said if hospitals get any more overcrowded, they’re going to have to make some very tough choices about who gets an ICU bed. That choice doesn’t seem so tough to me. [A] Vaccinated person having a heart attack? ‘Yes, come right on in; we’ll take care of you.’ [An] Unvaccinated guy who gobbled horse goo? Rest in peace, wheezy.” 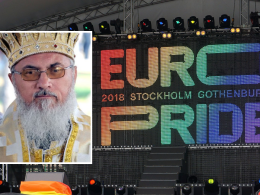 On Wednesday, a black man was arrested in connection to vandalism at Emory University. The man, Roy Lee…

When a group of cavers visited Dewey Hickman Nature Preserve in Indiana on Sept. 4, they were met…
Total
44
Share