The Federal Bureau of Investigation (FBI) needed a win after a string of failed domestic operations conducted by the spy agency (i.e., Gretchen Whitmer’s non-kidnapping, January 6) saw an increased need to defund the Bureau and start anew.

However, reports indicate that the FBI might have done their job for once. The DOJ announced the FBI and the Naval Criminal Investigative Service (NCIS) successfully arrested Jonathan Toebbe and his wife on espionage-related charges for attempting to sell the design plans for America’s nuclear submarines.

Jonathan Toebbe was a Navy nuclear engineer with access to nuclear submarine designs and intended to sell them to a foreign agent but instead spent a year selling them to an undercover FBI agent.

“For almost a year, Jonathan Toebbe, 42, aided by his wife, Diana, 45, sold information known as Restricted Data concerning the design of nuclear-powered warships to a person they believed was a representative of a foreign power. In actuality, that person was an undercover FBI agent. The Toebbes have been charged in a criminal complaint alleging violations of the Atomic Energy Act,” the DOJ announced.

ABC 7 reported that the couple supported Black Lives Matter, an organization that claims to support a path for justice for people of color. However, its protests caused billions in damage and several black deaths. 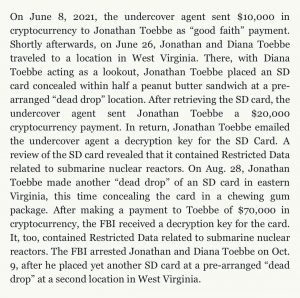 “The complaint charges a plot to transmit information relating to the design of our nuclear submarines to a foreign nation,” said Attorney General Merrick B. Garland. “The work of the FBI, Department of Justice prosecutors, the Naval Criminal Investigative Service, and the Department of Energy was critical in thwarting the plot charged in the complaint and taking this first step in bringing the perpetrators to justice.”

Neighbors told ABC 7 that Jonathan and Diana Toebbe were not “friendly” neighbors and often left their yard disheveled. A Black Lives Matter flag was proudly displayed in the unkempt yard.

Marmee Rooke, The Tatum Report
Marmee has been around grassroots politics all of her life. Being a stay-at-home mom, she knew she had a voice that needed to be heard. She is raising the next generation while fighting for her own. Email : marmee@tatumreport.com
"Driving Equality Bill" Philadelphia Passes Bill Banning Police From Making Minor Traffic Stops
EXCLUSIVE: Boeing Employee Talks Vaccine Mandate Protests
Kyrie Irving Says Being Un-Vaxed Is About 'Freedom' In Response To The Nets
Facebook "Whistleblower" EXPOSED For Marxist Sympathies On Hidden Twitter Account
Catholic Bishop For The Military Says Covid Vaccine Should Be A Choice And Catholics Are Exempt
See more...
Advertisement

Philadelphia made history as the first major city in the country to ban police officers from making minor traffic stops. The left believes that if these traffic stops are eliminated, […]

There are some updates in the investigation into the assassination earlier today of British Conservative MP Sir David Amess. As reported at The Tatum Report earlier, a knife-wielding assassin allegedly killed the Member […]

The Marine colonel that went viral last month for his videos demanding accountability from his superiors for the poor Afghanistan withdrawal of troops was sentenced on Friday.  Though Lt. Col. […]

The Texas House of Representatives approved a measure prohibiting transgender women and girls from participating in school sports. Reuters reports that the bill is almost guaranteed to be signed by […]

Boeing announced that all 140,000 of the company’s employees must be vaccinated against Covid. Leaked documents show that in response, Boeing employees are planning to join other vaccine mandate protests. […]

Former President Bill Clinton was hospitalized this week for an infection. He was admitted to UCI Medical Center’s ICU in Irvine after not feeling well on Tuesday. He contracted a […]

While the U.S.. is suffering through a monumental supply chain crisis, the Secretary of Transportation, Pete Buttigieg, has been on paid leave. According to Daily Wire, “The secretary has actually […]

A British Conservative Member of Parliament (MP), Sir David Amess, was stabbed and killed while conducting a “constituency surgery,” what Americans might call a “town hall” or “meet and greet” […]

NYC Judge Orders Father to Get Vaccinated to Visit His Daughter

A Manhattan judge has ordered a Long Island father to get vaccinated or submit to weekly Covid-19 testing to see his 3-year-old daughter. Justice Matthew Cooper, who is presiding over […]