The body of a young boy was found in a Jasper motel room. Authorities say the body likely belongs to a 6-year-old missing Houston boy, Samuel Olson. Theresa Balboa, the girlfriend of Samuel’s father, Dalton Olson, has been charged with tampering with evidence after the body was found bound and wrapped in plastic bags inside her motel room.

Conflicting reports from the family make it hard to pinpoint precisely when Samuel Olson went missing. Police say the boy was last seen at his school, Holbrook Elementary, in Cypress-Fairbanks ISD on April 30. However, Olson’s grandmother says the last time she “physically had [her] hands on Sam” was May 2.

On May 27, Samuel Olson was reported missing by Theresa Balboa, the father’s girlfriend. She said, “I was going to take Sam to school when his mother showed up with the police officer, or who I was under the impression to be a police officer, and they demanded me to release Sam.” This was proven false as Houston PD Assistant Chief of Criminal Investigations Command Heather Morris told the press that the mother had evidence proving she was at her home during the alleged meeting.

After the Houston police issued a missing child notice for Samuel on May 29, law enforcement and Texas EquuSearch began locating him on May 31. Dalton Olson, Samuel’s father, said, “I’ve literally tried to do everything from the very beginning to do what’s best for my son.” He said, “That is my whole world, and I can’t imagine if anything happened to him, and I believe he’s still out there.”

Before the body of the boy, they presume to be Samuel Olson was found, Tim Miller, the founder of Texas EquuSearch, said that he’s “worked many, many of these cases” but that he doesn’t “have a good feeling” about Samuel.” He said his worry stemmed from the issue that “nobody [could] find anybody that’s credible that can tell us the last time he was seen and where.”

Shortly after the search began, law enforcement officers executed a search warrant on Theresa Balboa’s resident and impounded her 2012 Dodge Avenger as evidence. This was when the police announced they believe that Samuel Olson might have been missing longer than the reported May 27 date.

A possible suspect is in custody and will be interviewed by our homicide investigators. More details will be provided at a news briefing tomorrow.  I ask the entire Houston community to join HPD in sending prayers for Samuel and his family.  2/2 #hounews

On June 1, Houston Police Chief Troy Finner tweeted, “It is with great sadness that I share with you that a body – of who we believe to be 6-year-old Samuel Olson – was recovered in a motel room in Jasper, Texas, earlier this evening.” He said, “A possible suspect is in custody and will be interviewed by our homicide investigators. More details will be provided at a news briefing tomorrow. I ask the entire Houston community to join HPD in sending prayers for Samuel and his family.” The possible suspect Chief Finner was referring to was Theresa Balboa.

ABC13 reports that Theresa Balboa allegedly drove to Cleveland, Texas, picked up a man who helped her load “a black and yellow plastic container that had a foul odor” from a Webster area storage unit. The man, who helped Balboa move the container, called the police the next day, telling them what he saw the day before. The report said, “Inside, an officer found what appeared to be a child’s body wrapped with black plastic bags and secured with duct tape.”

Sam’s mother, Sarah Olson, is choosing not to speak publicly about the possible death of her son. Instead, her lawyer, Marco Gonzalez, spoke for her, saying, “her utmost priority is to see that justice is done for her baby, Samuel.” He said that Sarah “is hurting very deeply” from this “tragedy.”

Her lawyer announced that the police have not asked her to come in and identify the body found in the motel room and that “she just wants to see her baby.” He said she doesn’t want to speak to the media because of her need to hold onto the “small glimmer of hope” that the body found isn’t Samuel’s.

Theresa Balboa was out on bond for assault against the father of Samuel Olson; Commander Morris told the press. She also stated that law enforcement “have other people that we have an interest in and talking to in this investigation.”

She added, “I’m not going to say that the father is a person of interest, but he’s definitely somebody that we can continue to talk to and get information from.” 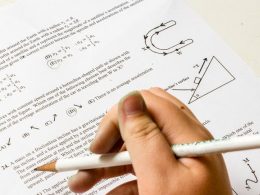 A leading Democratic economist is voicing concern about the emergence of “antiracist” math courses, saying it could be… 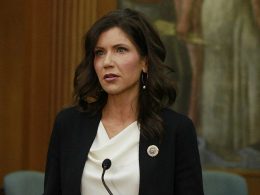 Republican Gov. Kristi Noem of South Dakota is taking the Biden administration to court over its refusal to… 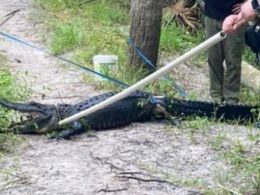 ‘I’m Dead’: Florida Biker Sees No Way Out After Losing Control and Ending Up in Water with Deadly Alligator

Lots of people talk about being in the right place at the right time, but there are certainly… 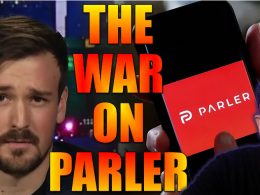