Every year, as summer comes to a close, cows, goats and sheep who have spent their summer in mountain pastures on the Alps are herded back down to the safety and warmth of barns before the cold sets in.

Farmers and locals in the alpine regions across Europe have made a celebration of the trek, drawing tourists from near and far to watch the annual cow parade and participate in local festivals.

Taking place between August and October, and unlike western cattle drives, the parades often feature cows decked out in sashes and intricate floral headpieces and wreaths. The clanging of the bells around their neck creates a unique backdrop for the migration.

In Switzerland alone, a total of around 380,000 cows make the trip annually, according to Swiss Club. But in order to get to the parade, the cows must first make it down the mountain.

With that many cows, it’s inevitable that a few will have suffered injuries during their time on the mountain that might prevent them from making it back down safely.

In such cases, there is an answer: The cows are airlifted.

On Friday, as nearly 1,000 cows started to make their descent to Urnerboden, Switzerland, there were at least 10 cows that were deemed unfit for travel by hoof.

One by one, those cows were harnessed up, lifted by a helicopter, and transported to solid ground a short — but steep — distance away.

The odd sight was recorded and shared across social media, to the surprise and delight of many.

One Swiss dairy farmer, Jonas Arnold, told Reuters that the airlift is necessary since vehicles can’t reach the remote areas where the cows graze.

“One reason for the helicopter transport is that you can’t reach some pastures by car, and the other is that some cows are injured, so they don’t have to walk all the way down,” he said.

While the transportation method was no doubt as unusual for the cows in question as it is for onlookers, the cows looked strangely at ease as they were carried through the air, and once on the ground again, they looked equally as calm.

While it’s impossible for the cows to say exactly how they enjoyed the experience, Arnold emphasized that it was necessary to move them, and didn’t seem to faze the cows.

“I didn’t ask a cow how it feels after such a flight, as it couldn’t answer,” he said, “but it’s only a short distance and it has to keep going. 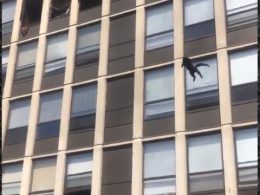 Riiver Nihil A raging fire erupted on the upper floors of a Chicago apartment complex last week. The… 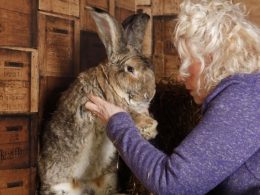 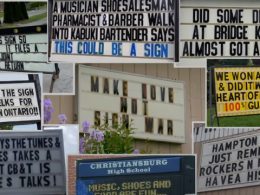 Riiver Nihil A war has broken out in the small Virginia town of Christiansburg. It started between two… 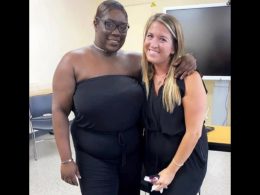 Caseworker Adopts 19-Year-Old After She Ages Out of Foster System: ‘We Both Wanted This for So Long’

Mothers’ Day is coming up, and it’s a holiday that many take for granted. It’s a nice way…
Total
8
Share