For the better part of the “pandemic,” democrat mayors and governors were lauded in mainstream media for their heavy-handed handling of Covid-19. However, as the pandemic hysteria dragged on from the now-infamous “15 days to slow the spread” and “flatten the curve” to 18 months of nonsensical mandates, the political “leadership” continued to be exposed as insincere at their best. Throughout the alleged crisis, the CDC was granted the power to create policy well outside the realm of mitigating a contagious virus.

The CDC wasn’t the only one using the exaggerated crisis to accumulate power for themselves and deflect from real problems. Predictably, big-city mayors and blue state governors consider their draconian restrictions and mandates to be their crowning achievements culminating in “vaccine passports,” which were deemed a conspiracy theory less than a year ago. Most notably, San Francisco Mayor London Breed and New York City Mayor Bill de Blasio have imposed “proof-of-vaccination” requirements for residents to enter most indoor businesses. The requirements were met with disdain and lawsuits from business owners, unions, and the general public, but the political establishment must press on with their agenda.

Since March 2020, the governors of California and New York have taken nearly identical steps in their attempts to combat the virus as if conditions on opposite sides of the country were the same. The Democrat governors were in sync with their policy announcements, oftentimes to the day, from the initial shutdowns to them eventually facing calls for resignation and a recall election.

California Governor Gavin Newsom was the first to issue a “shelter-in-place” order on March 19, 2020. New York governor Andrew Cuomo followed suit one day later with his “New York State on PAUSE” order, only days after claiming that a statewide shutdown couldn’t work. Newsom and Cuomo followed up their statewide shutdowns by requesting hospital ships be sent to their states to deal with the crippling influx of Covid-19 patients that ultimately never materialized. Newsom requested this from President Trump on March 18, 2020. On March 18, 2020, it was also reported that a hospital ship would be deployed to New York. Both ships left the states less than two months later, after treating few patients. The unused hospital ship would later come back to haunt Cuomo as his nursing home scandal began to gain mainstream coverage, which was subsequently washed over by his sexual harassment scandal.

The democratic governors diverged briefly on implementing mask mandates. According to Ballotpedia, New York issued a statewide mask requirement on April 15, 2020, while California didn’t mandate masks until June 18, 2020. However, the mandates remain active even as both states continue to all but forcefully vaccinate residents.

Newsom and Cuomo each engaged in separate political theatre, hypocrisy, and questionable backdoor deals during the height of the hysteria. Newsom made a $1 billion deal with China for masks that even Democrats had to question. He was also caught flouting Covid protocols while out to dinner in Napa Valley. While Cuomo didn’t openly violate the state’s Covid regulations, he did buddy up to China by calling Covid-19 a “European virus.” He embarrassed himself when he ranted about the dire need for ventilators that turns out weren’t needed at all. Cuomo also found the time to write a book about leadership and accept an Emmy for his daily theatrics, which was later rescinded.

As the pandemic began to wane, the media, the CDC, and Dr. Fauci continued to move the goalposts on vaccination rates, herd immunity, origins of the virus, and new strains. Not to be outdone, Newsom and Cuomo continued their theatrics, with vaccine lotteries and vaccination celebrations followed by threats, mandates, and name-calling. As free donuts and french fries weren’t enough to get people excited for unnecessary vaccines, Cuomo announced a vaccine lottery on May 20, 2021, to encourage people to get the shot. Newsom followed up with his lottery announcement on June 10.

Both states celebrated their full reopenings approximately 14 months after their initial shutdowns. California reopened on June 15, 2021, with some confusion about continued mask use. New York had fireworks displays across the state on the same day to celebrate a 70% vaccination rate. With the full reopening of perhaps the most highly locked down states in the country and the accompanying celebrations, it might be safe to assume the pandemic was finally over.

Unfortunately, that would not be the case. Just over a month later, Newsom and Cuomo each made outlandish remarks aimed at unvaccinated people in their states. On July 26, Newsom made appearances on MSNBC and CNN, where he likened being unvaccinated to driving drunk. Also on July 26, during a press conference, Cuomo talked about going door to door to vaccinate people, saying, “we have to get in those communities, and we have to knock on those doors, and we have to convince people and put them in a car and drive them and get that vaccine in their arm. That is the mission.”

Cuomo’s mission would not be accomplished, at least not by him. He was forced to resign under mounting pressure from fellow Democrats, including President Joe Biden, following an investigation from the state’s AG Leticia James, revealing he sexually harassed at least 11 women. However, he has still been able to avoid consequences for his deadly nursing home executive order. Newsom’s political career is also in jeopardy as he faces a recall election that could result in his ousting. While Newsom has recently appeared flustered and nervous, the Democrat machine still seems to be working in his favor. California is blanketed in mail-in ballots, with some even being sent out of state and others being found in the backseat of a convicted felon’s car.

As Newsom and Cuomo read from the same playbook that led both of them to face calls to resign eventually, mayors in cities within each state also made eerily similar moves. Mayor Breed of San Francisco and Mayor de Blasio of New York City each implemented vaccine requirements that led to bizarre situations for NBA players and performers hoping to get back to some semblance of normal. Both New York City and San Francisco also introduced plans to pay criminals for good behavior as both regions struggle with a sharp uptick in crime.

The political leadership in these two states is clinging to the Covid hysteria as an endless source of power and as a diversion from the laundry list of problems facing its residents. Even as the virus dissipates and crime and overdoses ravage their cities, the focus remains on Covid cases and vaccine requirements.

Since the initial shutdowns in California and New York, it was clear that there would never come a day where anyone would willingly declare the pandemic over and encourage Americans to return to the lives they knew in 2019.

Last month, United Airlines told their 67,000 employees that they could receive religious, personal, and medical exemptions for…

Middle School Removes “F” Grade in the Name of Equity 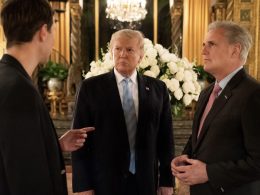 After Donald Trump’s Mar-A-Lago home was raided by the FBI on Tuesday, Republicans took to the internet to…

The grocery store giant, Walmart Inc, launched a training program that seeks to teach their employees that they…
Total
3
Share