Shocking revelations came from newly released documents that provide details showing Dr. Fauci lied to Senator Rand Paul under oath. The documents claim that Dr. Fauci had a part in funding and supporting gain-of-function research on multiple coronaviruses at the Wuhan Institute of Virology in Wuhan, China.

The Intercept released a report, after a simple Freedom of Information Act request the publication pursued against the National Institutes of Health, that contains information from more than 900 pages of documents related to the work between Eco Health Alliance and the Wuhan Institute of Virology. Eco Health Alliance, financed by federal money awarded by Dr. Fauci, used Dr. Fauci’s award money to fund gain-of-function research into bat coronavirus at the Wuhan lab. The Tatum Report has consistently reported on the Biden Administration’s connections with the Chinese Communist Party and Dr. Fauci’s connections to the President of Eco-Health Alliance Peter Daszak and the Wuhan Institute of Virology.

The treasure trove of documents that became available for the public yesterday shows that the Eco Health Alliance, guided by Principal Investigator Peter Daszak, was awarded $3 million from 2014-2018 from the National Institutes of Health to conduct the study: Understanding the Risk of Bat Coronavirus Emergence. The study specialized in identifying and genetically modifying bat coronavirus that would likely infect humans using ACE2 receptors.

From the Project Summary: “This project will examine the risk of future coronavirus emergence from wildlife using in-depth field investigation across the human-wildlife interface in China, molecular characterization of novel CoVs and host receptor binding domain genes, mathematical models of transmission and evolution, and in vitro and in vivo laboratory studies of host range. 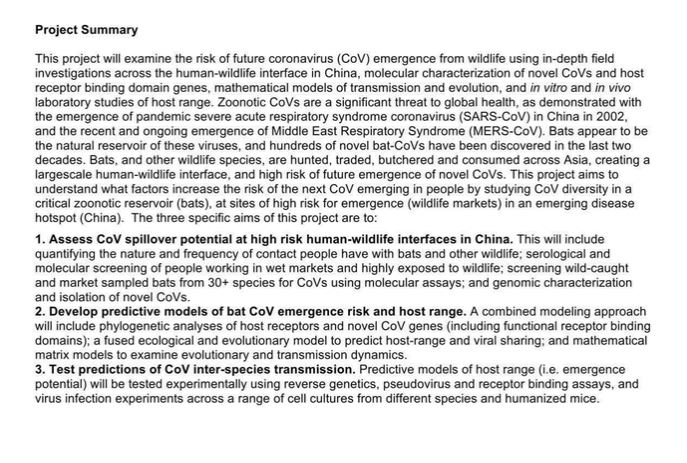 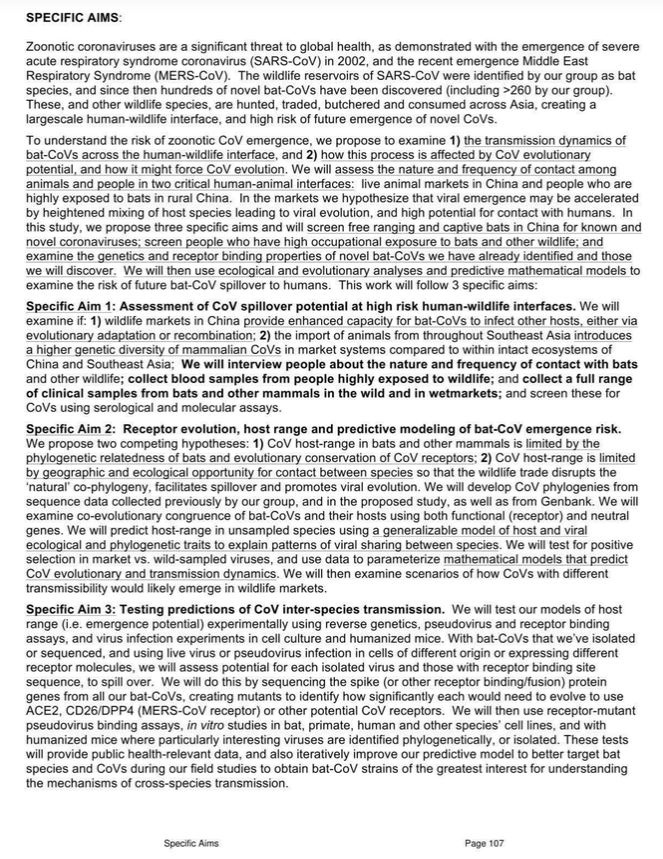 Shi Zhengli, a senior scientist at the Wuhan Institute of Virology, wrote that “the focus of this project is to understand the risk of coronavirus spillover from bats to people in China, using ecological analyses, fieldwork, receptor binding assays, and modeling approaches.”

Dr. Zhengli’s research was “responsible for diagnosis, genomics, and isolation of coronavirus from wild and domestic animals in Southern China and for analyzing their receptor binding domains.” 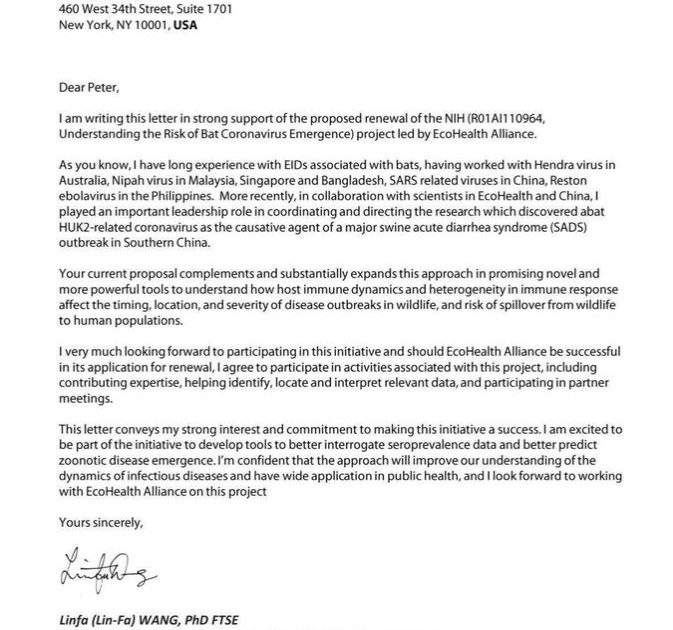 A molecular biologist from the Broad Institute, Dr. Alina Chan, spoke to the Intercept about the Eco Health Alliance study and how this proves that a leak at the Wuhan lab could have caused the Covid-19 pandemic.

“In this proposal, they actually point out that they know how risky this work is. They keep talking about people potentially getting bitten – and they kept records of everyone who got bitten,” Dr. Chan said.

He went on to say that “the materials reveal that the resulting novel laboratory-generated SARS-related coronaviruses also could infect mice engineered to display human receptors on cells (“Humanized mice”).”

Not only that, but Dr. Ebright said the materials provided show that the gain-of-function research conducted and paid for by Dr. Fauci revealed: “for the first time that one of the resulting novel, laboratory-generated SARS-related coronaviruses – one not been previously disclosed publicly – was more pathogenic to humanized mice than the starting virus from which it was constructed.”

Sen. Rand Paul reacted to the news via Twitter yesterday, saying, “Surprise Surprise – Fauci lied again. And I was right about his agency funding the novel Coronavirus research at Wuhan.”

After sharing multiple reports on the leaked documents, Sen. Paul wrote, “I have already asked the DOJ to review Fauci’s testimony for lying to Congress.” Sen. Paul went on to say that Dr. Fauci “needs to be held accountable.”

“It’s not about freedom or choice,” said the president during a press conference on Thursday. Americans are fuming after President…

A group of 17 American missionaries, including children, were kidnapped in Haiti on Saturday. According to a message…

Unprecedented seems to be the word of the last two years. The fog of war clouds your eyes…

Last month, United Airlines told their 67,000 employees that they could receive religious, personal, and medical exemptions for…
Total
0
Share