Americans are lucky that we live in a country young enough to vividly remember the battles fought and won to ensure that the independence we asserted is our right, given by God and protected by our Constitution, will always be available to its people.

We hold that July, 4th 1776, is the birthdate of The United States of America and thus the beginning of the promise to Republicanism. A dream was born that liberty was available to all men, regardless of title or money. We are a country run by the will of the people, not a monarch or a small ruling class of elites. Our Founding Fathers intended that our new Republic grant above all things the protection of individual liberty.

Abraham Lincoln wrote a letter to Henry L. Pierce, regretfully declining an offer to attend a festival in Boston to celebrate the memorial of Thomas Jefferson’s birthday in 1859. This was the same year as the infamous Harpers Ferry Rising, which Pulitzer-prize-winning author Tony Horwitz claims in his book, Midnight Rising: John Brown and the Raid That Sparked the Civil War, was the first spark that ignited the start of the Civil War.

Whether his assertions are substantiated or not, the fact remains that when abolitionist John Brown lead 21 men to capture the federal armory in Harpers Ferry, he intended to end slavery through force. The event directly speaks to the divide in America at the time and thus makes Lincoln’s words even more appropriate for our current societal crisis. 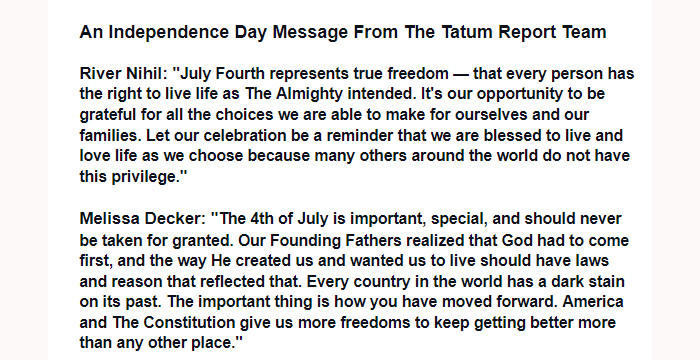 In the letter, Abraham Lincoln congratulates Boston’s ability to honor Thomas Jefferson, despite founding and belonging to the opposite political party. Lincoln remarks that saving the principles of Jefferson – liberty of men – would be “no child’s play.”

He wrote that Americans should not participate in political parties that “hold the liberty of one man to be absolutely nothing, when in conflict with another man’s right of property.” He said instead to be “for both the man and the dollar; but in cases of conflict, the man before the dollar.”

While some claim that Jefferson meant these liberties apply only to ‘superior races,’ Lincoln writes that “those who deny freedom to others, deserve it not for themselves; and, under a just God, can not long retain it.”

“All honor to Jefferson – to the man who, in the concrete pressure of a struggle for national independence by a single people, had the coolness, forecast, and capacity to introduce into a merely revolutionary document, an abstract truth, applicable to all men and all times, and so to embalm it there, that today, and in all coming days, it shall be a rebuke and stumbling-block to the very harbingers of reappearing tyranny and oppression,” wrote President Lincoln.

The Declaration of Independence doesn’t say that only some men or free men were equal in our new Republic; it says, “We hold these truths to be self-evident, that all men are created equal.” Jefferson wrote that our Creator endows ALL men “with certain unalienable Rights, that among these are Life, Liberty and the pursuit of Happiness.” 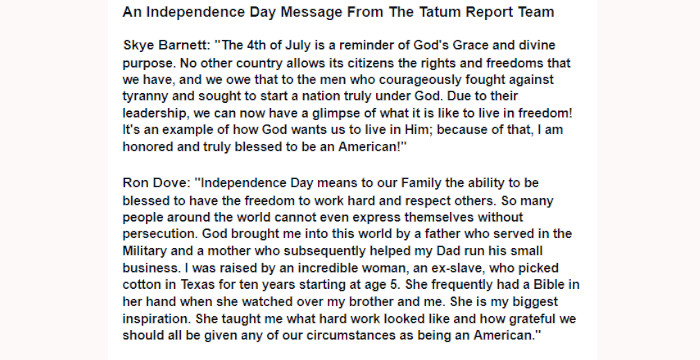 Our Republic is unique in that we became a nation connected by the common will of the people to be self-governed. We were a nation founded on biblical values. God, the Father, bestowed upon us free will, and America serves as a beacon of that promise from God.

Thomas Jefferson wrote that for Americans to “secure these rights,” we need not forget that our Government has its power solely “from the consent of the governed.” And, “whenever any Form of Government becomes destructive of these ends, it is the Right of the People to alter or to abolish it, and to institute new Government.”

Alexander Hamilton, writing under the name “Lucius Crassus,” cautioned Americans on allowing the toxic division to rot the American promise of liberty.

Hamilton says that “the safety of a republic depends essentially on the energy of a common National sentiment; on a uniformity of principles and habits; on the exemption of the citizens from foreign bias, and prejudice; and on that love of country which will almost invariably be found to be closely connected with birth, education and family.”

Although Hamilton spoke of significant, uncontrolled immigration, this feeling applies to the social problems of today. Americans are waking up to the horrors of CRT, which are anti-America, and seek to rewrite American histories so that American people are taught to split by race and hate our National sentiment.

America was not founded on slavery or racial division but on liberty. Men took liberty away from other men; there is no denying that. However, as Americans, we united under a common National sentiment – to preserve the Union.

To remain a free country, with a government that is beholden to its citizens, we must oppose those forces that seek to divide us based on our race or religion and remind ourselves what it means to be freemen. And therefore, it is right and just that every year on Independence Day, we once again come together to celebrate our shared love and admiration for our Republic.

Marmee Rooke, The Tatum Report
Marmee has been around grassroots politics all of her life. Being a stay-at-home mom, she knew she had a voice that needed to be heard. She is raising the next generation while fighting for her own. Email : marmee@tatumreport.com
Tucson Police Officer Danny Leon Takes Down Violent Gunman [VIDEO]
Facebook Took Down Profile at Hunter Biden's Request Says New Claim
Five Texas Democrats Who Flew to D.C. Test Positive For COVID
Lawsuit Filed In Georgia Claims 2020 Senate Election Results Should Be Contested
NFL Will Play Black National Anthem BEFORE The Star-Spangled Banner
See more...
Advertisement