On August 2, the Arizona Election audit came back in the news. The subpoena from the Arizona State Senate requiring Maricopa County and Dominion Voting Systems to hand over the routers and other audit material to audit officials had expired.

Instead of bringing the routers to the Senate as instructed, Maricopa County and Dominion sent separate letters indicating their lack of faith in the Senators’ ability to pursue them legally.

The Maricopa County Board of Supervisor’s letter read like a snotty teenager’s response to their English teacher for catching them cheating on their vocabulary test. It started, “It is now August 2021. The election of November 2020 is over. If you haven’t figured out that the election in Maricopa County was free, fair, and accurate yet, I’m not sure you ever will.”

The letter, written by Chairman Jack Sellers, claimed that it was time to move on from the irregularities in the 2020 General Election and called any effects to uncover what happened as an “adventure in never-never land.”

Sellers said he is “confident that our staff and volunteers ran the election as prescribed by federal and state law.” He claimed, “there was no fraud, there wasn’t an injection of ballots from Asia, nor was there a satellite that beamed votes into our election equipment.”

“Release your report and be prepared to defend any accusations of misdeeds in court. It’s time to move on,” the Maricopa County letter stated.

The Maricopa County Board of Supervisors weren’t alone in their snarky letter writing as John Poulos, Dominion Voting’s President and CEO, sent the Senators a slightly less condescending letter.

Dominion claims that since the company is not part of the public sector is “has no obligation to make its records available for public inspection.”

The Arizona Senate has long held that although Dominion is technically a private company, it was hired and worked as an agent of Maricopa County elections. Therefore, any work for the county that contains the public’s confidential information is subject to Senate oversight.

“Relatedly,” the letter goes on, “Dominion’s privately-owned security keys and confidential passwords are not “public records” subject to disclosure under the law.”

John Poulos finished, “Accordingly, because the law has no application, Dominion will not produce or allow inspection of the materials requested in Senator Fann’s July 23 letter.”

As expected, The Arizona Senators didn’t receive the letters claiming there was no fraud and that our votes shouldn’t be considered reviewable well.

As soon as the letters were received, Senator Wendy Rogers promised that “Corporations are not above the law.”

This is the response letter from Dominion. Corporations are not above the law. More to follow. pic.twitter.com/dQtkQWq8ON

The Arizona GOP Chairwoman Dr. Kelli Ward tweeted a screenshot of the Maricopa County letter, saying, “This BS is the “official reply from Maricopa County to the lawful subpoenas issued by the AZ State Senate. They must be held accountable.”

This BS is the “official reply” from Maricopa County to the lawful subpoenas issued by the AZ State Senate. They must be held accountable. #AmericasAudit pic.twitter.com/um2tXSuM7v

In kind, Senate President Karen Fann released a statement saying, “based on today’s responses from Maricopa County and Dominion, it appears we will soon secure copies of ballot envelopes and critical voter registration information.”

Sen. President Fann wrote that “Maricopa County’s slow-walk of the Senate public records request into a possible breach of the voter registration server is frustrating, and we will try to be patient and give the County more time to comply, as they requested.”

She said the Senate would be “weighing” their options “for securing access to the routers and passwords and will make a thoughtful decision in due course after conferring with my staff, counsel, and colleagues.”

Fann remarked that the decision to send letters rather than routers “continues to delay the results and breeds distrust.”

Senator Borrelli stayed eerily silent yesterday when the letters were sent, sending a simple tweet response of “stand by” when a Twitter user tweeted a photo of him demanding to “release the Kraken!!”

But like with most things in life, the more you wait, the better they are. His response was not to write a strongly worded statement in contempt of the letters. In his official capacity, Senator Borrelli sent a request for the Arizona Attorney General to investigate the Maricopa County Board of Supervisors.

His statement said the investigation into Maricopa County Board of Supervisors would examine “their failure to comply with subpoenas from the State Senate.” 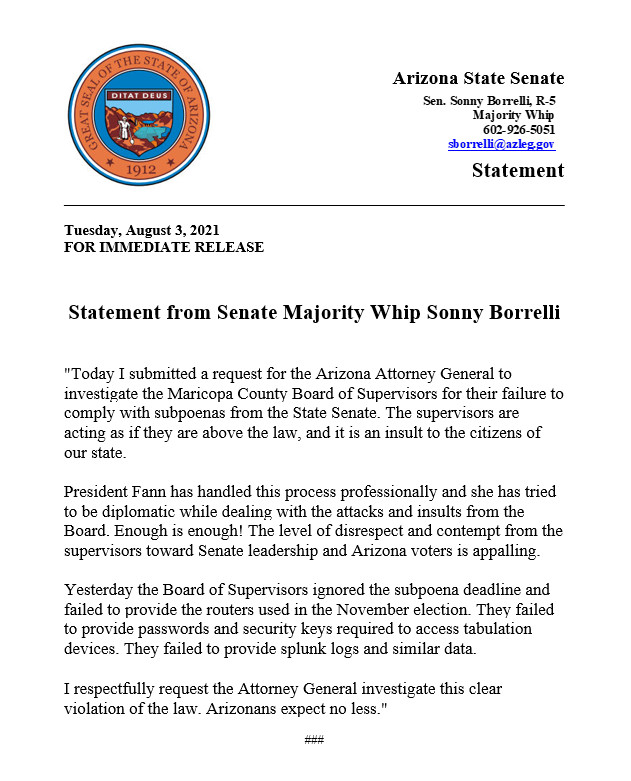 The Arizona audit will press on. “I respectfully request the Attorney General investigate this clear violation of the law. Arizonans expect no less,” finished Sen. Borelli.

Sen. Wendy Rogers warned the Dominion and the Maricopa County Board of Supervisors on Steve Bannon’s WarRoom that they should watch out.

She said, “let me put it this way: I’m Air Force, and Sonny Borrelli is Marines. And I can tell you that when I landed, my C141 and 200 Marines would exit out the back you don’t want to be in the way.” She said, “We are coming for you; you better check your six.” 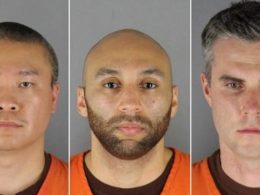 Riiver Nihil In a new court filing on Wednesday, the defense for the other three officers charged in the death… 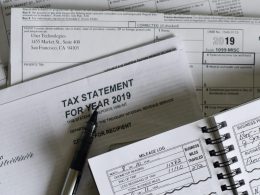 The IRS encourages Americans to turn in their tax-cheating neighbors by offering, according to the New York Post, “a… 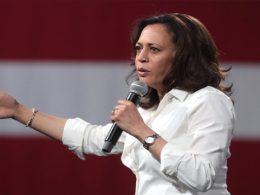 Where is Kamala Harris? President Biden appointed her to manage the border crisis three weeks ago and has… 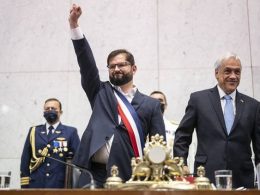 Never doubt why the Framers made the U.S. Constitution so difficult to alter. Americans need only to look…
Total
38
Share