Texas Files ANOTHER Lawsuit Against Biden, This Time Over the Border Wall

Republican Congresswoman Marjorie Taylor Greene is back online Tuesday morning after a 12-hour suspension of her Twitter account.

Twitter accused her of spreading disinformation regarding the coronavirus vaccine, punishing her with a half day’s suspension from their platform.

Greene certainly had something to say when she was free from Twitter “jail” and back online. “American social media company Twitter banned me for 12 hrs, censoring me, & violating my freedom of speech.

You know who else silences, censors, and bans people they don’t like and want heard.

American social media company Twitter banned me for 12 hrs, censoring me, & violating my freedom of speech.

You know who else silences, censors, and bans people they don’t like and want heard.

What did the Georgia Republican tweet that was suspension-worthy?

On July 18, she retweeted Dr. David Samadi’s tweet, “In the United Kingdom, 47% of new COVID-19 cases are vaccinated people,” with her own caption, “This is why no entity should force NON-FDA approved vaccines or masks.

Instead help people protect their health by defeating obesity, which will protect them from covid complications & death, and many other health problems. We should invest in health, not human experimentation.” 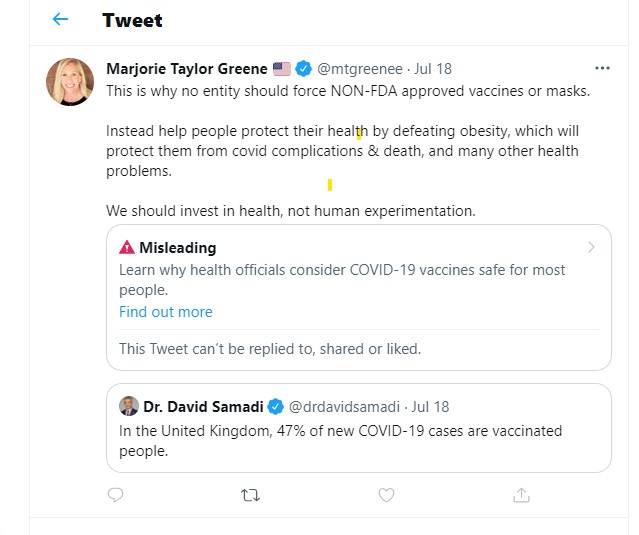 A day later, she again retweeted someone else’s tweet with her own caption.

This time, the original tweet is a 3 part thread from fellow Representative Thomas Massie, addressing the possibility of compulsory vaccination in the military. He’d received communication from a military member and shared it publicly.

Massie’s tweet begins, “Just received this from someone in the military regarding possible compulsory COVID vaccines:

‘Good evening, Congressman. Just thought I’d pass word that >15% of the officers at my command will either retire early or resign their commissions if the mandate is given.’ “

Greene’s retweet of Massie’s post included her personal response, “The controversial #COVID19 vaccines should not be forced on our military for a virus that is not dangerous for non-obese people and those under 65. With 6,000 vax-related deaths and many concerning side effects reported, the vax should be a choice not a mandate for everyone.”

Just received this from someone in the military regarding possible compulsory COVID vaccines:

“Good evening, Congressman. Just thought I'd pass word that >15% of the officers at my command will either retire early or resign their commissions if the mandate is given.”

According to the GAO and congressional testimony, there were similar results (departures) when the military mandated the anthrax vaccine. 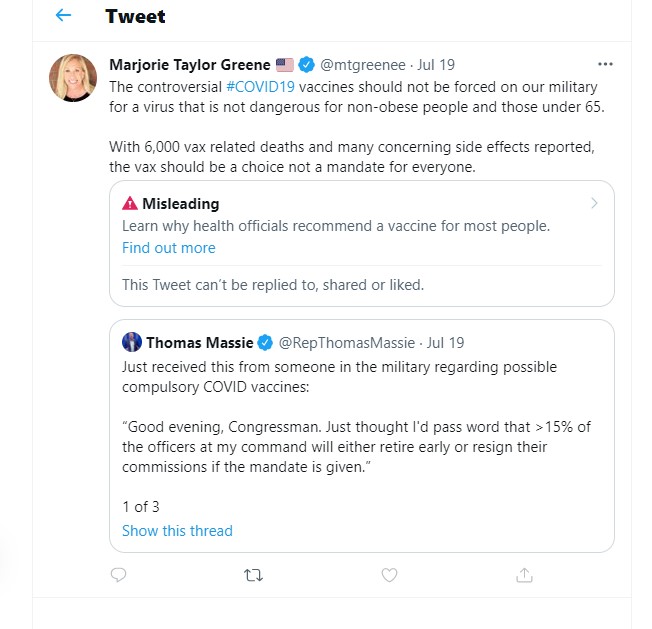 It’s worth mentioning that both of the original tweets she retweeted are still available online without any disclaimer.

Greene’s tweets, however, are not necessarily available from her profile page but are accessible if you have the link. They also come with a disclaimer warning the reader against misinformation. The mobile version of Twitter does not openly display the content on her profile landing page, while the desktop version seems to be all-inclusive.

This is technically her third suspension this year; the first occurred back in January, before Twitter’s new suspension rules.

The suspension, claims Twitter, were for posts that they say included false claims about widespread voter fraud in Georgia in both the November election and the January 5 Senate runoffs, as well as a series of tweets that repeated more election fraud claims, calling Georgia’s elections officials “morons.”

“Morons like you are responsible for losing GA’s 2 Republican Senate seats. You ran a Nov 3rd election that was stolen bc you idiots at the SOS mailed out millions of absentee ballots to any one and everyone while GA was an open state. Then you counted ballots on Dominion.”

The tweet comes with a disclaimer “This claim of election fraud is disputed, and this Tweet can’t be replied to, retweeted, or liked due to a risk of violence.”

The second suspension happened in April, to which Twitter wrote it off as a mistake in their automated system.

“Everyone knows that’s a LIE, and it was no mistake,” tweeted Greene afterward. 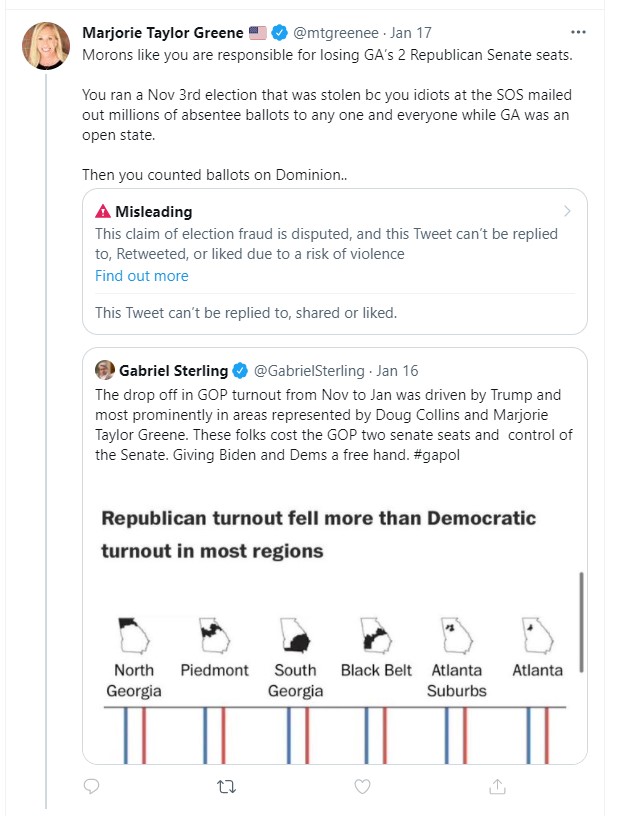 …I’m not the one GA voters/taxpayers are blaming for handing over the President’s race AND our Senate seats to the Democrats on a silver platter.

No matter how many of you RINO’s and political hacks cry to the pundits blowing your bull shit into the wind. …all while you blow hards collect a tax payer funded paycheck…

…So little Gabriel, you can tweet all the stupid lies you want, but mark my words, Republican voters in Georgia know exactly who they are blaming.

Riiver Nihil, The Tatum Report
Riiver Nihil is a born and raised American who values real freedom and the American Constitution. She loves to inspire and empower others to always question the mainstream narrative, think for themselves and stand up for their American and God-given rights. Email : riiver@tatumreport.com
DC Sued for Letting 11-Year-Olds Get Vaccinated Without Parental Consent
Texas Files ANOTHER Lawsuit Against Biden, This Time Over the Border Wall
Speaker Pelosi Rejects 2 of 5 Republicans For January 6 Committee
Independent Study Shows Johnson & Johnson Vaccine Less Effective Than Reported
Biden Administration Sued By Texans; Border Towns Are Overrun With People And COVID
See more...
Advertisement

Authorities have reported that the FBI used at least 12 confidential informants to entrap a small group of six defendants involved in the Gov. Whitmer kidnapping, weeks before the 2020 election. […]

California Governor Gavin Newsom recently encouraged homeless people from around the country to go to California to pursue “new beginnings.” The remarks came while Newsom was in Sonoma County to […]

It is your American right to raise your children as you see fit and deny them the experimental vaccination — unless you live in the District of Columbia. Parents local […]

Texas Files ANOTHER Lawsuit Against Biden, This Time Over the Border Wall

If there is one state in the nation that has made it abundantly clear that they do not support the immigration decisions made by the current presidential administration, it’s Texas. […]

The Tatum Report does not endorse any candidate for political office Alexandria Ocasio-Cortez (AOC) may have to up her game to keep her seat in congress come 2022. AOC has […]

From Absurdities, to Tyrannies, to Atrocities

OPINION | The opinions expressed in this article are that of the writer, and may not necessarily reflect those of Tatum Report LLC In my most recent book, “The Obama […]

House Speaker Nancy Pelosi is under fire from House Republicans for rejecting two of their candidates from participating in the House committee investigating the January 6 insurrection. House Minority Leader […]

Baby of a Jefferson County Deputy Shot and Killed; History of Domestic Violence at Address

An 11-month-old baby of a Jefferson County Sheriff’s Office (JCSO) deputy was shot and killed around 3:49 pm at an apartment in the 1800 Block of Carson Road in Birmingham, […]

China Refuses Further Investigation by WHO Into COVID-19 Origins

Chinese officials have recently made it abundantly clear that they will reject any further World Health Organization (WHO) or United Nations investigation into the origins of Covid-19. Zeng Yixin, deputy […]