Milwaukee alderwoman and Democrat candidate for the United States Senate, Chantia Lewis, has been charged with cheating the city of Milwaukee and her campaign of more than $21,000.

The complaint against her claims she “misappropriated funds belonging to her campaign by depositing campaign contributions into her personal bank accounts, as well as using campaign funds to pay for personal expenses. Lewis further falsely represented to the City of Milwaukee that she was owed reimbursement for expenses incurred on City-travel, when in fact she paid for those expenses out of her campaign account. All of these behaviors were in excess of her authority and were done without consent.” 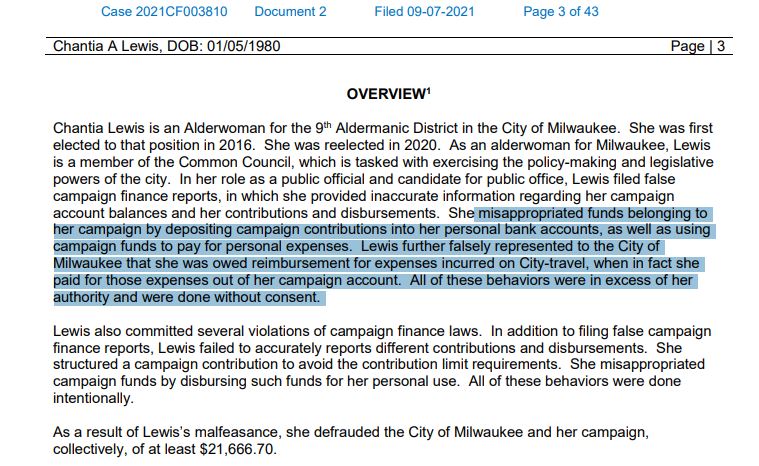 TMJ4 reports Lewis is accused of taking 13 “trips, including personal and business stops in Pittsburgh, Houston, Washington, D.C., the Wisconsin Dells, and three trips to Las Vegas, while falsely requesting reimbursements totaling $3,291.11 from her campaign and $2,249.75 from the City of Milwaukee.” She reportedly “doubled-dipped” $5,540.86 in trip expenditures in total. The complaint also alleges Lewis transferred campaign donations totaling $16,125.84 into her personal account to use for expenses such as rent, car repairs, and credit card payments. Further, Lewis is accused of making 22 unaccounted ATM cash withdrawals totaling $5,590.50. The 41-year-old is charged in Milwaukee County Circuit Court with five criminal counts, including embezzlement over $10,000, theft by fraud under $2,500, misconduct in public office, and two campaign finance charges. Following the charges brought against her, Common Council President Cavalier Johnson said she would be removed from all of her committee assignments, stating, “in light of the five felony charges brought against Alderwoman Chantia Lewis by Milwaukee County District Attorney John Chisholm, I am, effective immediately, relieving her of all committee assignment duties.”

Jason Luczak and Emil Ovbiagele represent Lewis. They maintain her innocence, referring to the District Attorney’s office’s allegations as “accounting errors.” Luczak stated, “we have been in touch with the DA’s office to work with them to get a resolution to this matter that would not lead to criminal charges.” Ovbiagele said, “At the heart of this case is an issue involving accounting errors, accounting problems, campaign accounting problems. I think that’s going to become quite clear as this case proceeds and works through the court system.” When asked about the amount of “accounting errors” that occurred, Ovbiagele stated, “you have to understand that the nature of the amount doesn’t necessarily mean much. You have to have the proper context for it.”

This isn’t the first time Lewis has been accused of misusing funds. According to CBS58, Lewis accepted gift cards and donations from friends and family for her birthday in January 2020 with the CashApp username $D9th. In 2016 she was elected to Milwaulkee’s 9th District and re-elected in 2020. She is the vice head of the Council’s Public Safety and Health Committee and was part of seven committees. Lewis also declared bankruptcy twice, once in 2005 and again in 2008.