Montana has just joined other states in passing legislation to protect the Second Amendment in the Big Sky state. The Western Journal reported that Gov. Greg Gianforte tweeted, “Today, I proudly signed Rep. Hinkle’s law prohibiting federal overreach into our Second Amendment-protected rights, including any federal ban on firearms.” 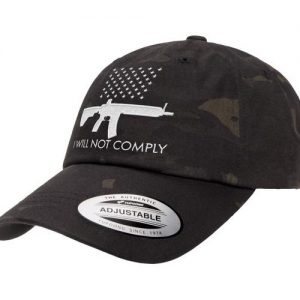 NRA spokesman, Colin Noir, recently appeared on FOX’s Tucker Carlson Tonight. Noir wore a baseball cap which displayed, “I will not comply” along with the American flag canton and image of an AR-15. Noir made a point that Americans need to keep in mind. The Constitution is clear about the rights it enumerates, though the Left tries to complicate language for political expediency. They often trot out their trite, “common sense gun laws.” Whenever you hear “common sense” from an anti-gun leftist, run!

The Constitution clearly gives the right to keep and bear arms to individuals. Noir says his position is solidified by the D.C. v. Heller SCOTUS decision. Still, anti-gun Democrats, including Joe Biden, continue pushing to infringe on the Second Amendment. Each time they do this, they expect their illegal legislation to suspend Americans’ gun rights until the Court decides the case—whenever that occurs.

Many are just saying, “No!” The anti-gun cult doesn’t get to do that to Americans and, fortunately, several red-state governors agree. Liberty-loving Americans know what the Second Amendment means, and people such as Gov. Gianforte, are providing true leadership other politicians should emulate.

Suspect Shoots Man In Front Of Two Children
Suspected Child Killer Lunges For Cops Gun During Interrogation
Capitol Police Get Emotional Support K9, And It's Not What They Need
The Officer Tatum VS Don Lemon: Tatum Wrecks The Liberal Crybaby
Critical Race Theory Is All About Revenge
See more...
Advertisement