Alexandria ‘Sandy’ Cortez just came out as a sex abuse survivor in a tearful Instagram video on Monday night. Then she accused Republicans of using ‘abusers tactics’ after sharing her horrific experience in the US Capitol as a mob of Trump supporters stormed her hall and threatened her. She was forced to hide in the bathroom in that “near-death experience” and those awful  terrorists were screaming, “Where is she!?”

It appears though that AOC  was not actually in the Capitol at the time but rather hiding in her office in the Cannon Building, which is connected to the Capitol by a tunnel but was not breached.

People have been posting maps showing the distance between the Cannon Building and the Capitol to show that Ocasio-Cortez was not in danger, but she’s pushing back:

This isn’t a fact check at all. Your arrows aren’t accurate. They lie about where the mob stormed & place them further away than it was.

You also fail to the convey *multiple* areas people were trying to storm. It wasn’t 1. You also failed to show tunnels. Poor job all around.

.@AOC made clear she didn’t know who was at her door. Breathless attempts by media to fan fictitious news flames are dangerous.

My office is 2 doors down. Insurrectionists never stormed our hallway. Egregious doesn’t even begin to cover it. Is there nothing MSM won’t politicize? pic.twitter.com/Tl1GiPSOft 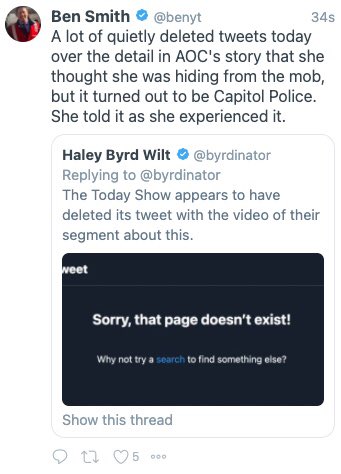 That hashtag, #AlexandriaOcasioSmollett, assumes that actor Jussie Smollett wasn’t attacked and nearly lynched outside a Chicago Subway at 2 a.m. by two Trump supporters shouting, “This is MAGA country.”

Let’s get it to number one! pic.twitter.com/pghep5HN0Z

Oh man #AlexandriaOcasioSmollett is trending right now, after everyone is finding out that AOC was not inside the capitol on 1/6!

AOC tried to make the Capitol Riots about herself and the heifer wasn’t even in the building.

That’s why we call her #AlexandriaOcasioSmollett.

Someone at Twitter is about to receive an angry phone call from Sandy Ocasio’s congressional office in the Cannon House Office Building—which, by the way, is not in the Capitol.#AlexandriaOcasioSmollett pic.twitter.com/BCpRoDLWX2

Yup.. the feigned fear for her life was going to eventually catch up with her. #AlexandriaOcasioSmollett is starting to look very appropriate.

Rep. Alexandria Ocasio-Cortez (D-N.Y.) was not in the U.S. Capitol Building when a mob violently stormed it on January 6 but rather in her Cannon Office Building office. The second-term congresswoman has since recanted her experience during the deadly siege, which she has described as “near-death.” However, no rioters broke into Cannon, a Wednesday report from the conservative publication RedState claims.

If you are in the mainstream media and you fail to honestly fact check a politicians story, guaranteed someone else will & make you look biased, incompetent, foolish or all 3. @JackPosobiec https://t.co/IYbuR5Kfyx

Kristie McDonald, The Tatum Report
Kristie has been in the news business for 9 years and is an advocate for 'truth in news' rather than regurgitating the 'anti Trump' propaganda that so many in the main street media now do. She is a huge advocate of free speech and abhors big tech censorship
CNN's Brian Stelter Loses His Rag Over Tucker: 'Carlson is the new Donald Trump' [VIDEO]
Reports Suggest Meghan Markle Is Considering A Run For President
Violence and Protests Across America Mark The Anniversary Of Breonna Taylor's Death [VIDEO]
Sen. Tom Cotton (R-AR): Biden Gets 'An A-Plus' On Immigration... If You're a Human Trafficker or Drug Dealer [VIDEO]
Tucker Carlson Slams Biden: “How dare you tell us who we can spend the Fourth of July with.” [VIDEO]
See more...
Advertisement