AOC is "Happy" to be a Planned Parenthood Baby

Former Minneapolis Police officer Derek Chauvin was found guilty by a jury of his peers of second-degree unintentional murder, third-degree murder, and second-degree manslaughter in the death of George Floyd. The case invoked a movement filled with hate and anger that saw billions of dollars worth of damages done to communities already hurting during the pandemic.

The Minneapolis jury agreed that Chauvin was the cause of George Floyd’s death. This verdict was found despite the fact that the Hennepin County medical examiner admitted on the stand that Floyd had a fatal amount of drugs in his system at the time of his death. During cross-examination, the defense also showed that, had George Floyd been found at his house with no signs of trauma, his death would have been ruled a drug overdose.

“Derek Chauvin is being held in solitary confinement for 23 hours a day in Minnesota’s only maximum-security prison after he was convicted of murdering George Floyd and led out of a courtroom in handcuffs,” according to the NY Times. The report states that Chauvin, 045, had his bail immediately revoked after being found guilty by the jury.

The jury spent 10 hours deliberating their eventual guilty verdict as crowds and media vultures circled outside the courthouse. The heavily guarded courthouse “was ringed with concrete barriers and razor wire, and thousands of National Guard troops and law enforcement officers were brought in ahead of the verdict,” reported Fox. 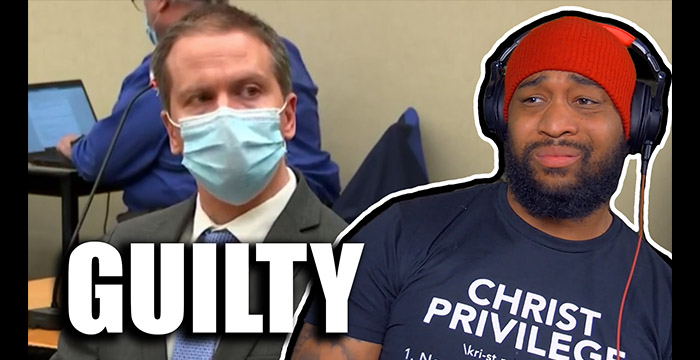 On his YouTube video, Brandon Tatum spoke more in-depth about the trial saying, “I think it was an unfair trial. I don’t think Chauvin should have been convicted for this. Given the fact that George Floyd did have lethal levels of drugs in the system.” Brandon went on to say, “ These drugs can cause a person to lack oxygen and to suffocate and die, make you stop breathing. It can hamper your breathing and can cause you to go into cardiac arrest. So when you take multiple times to the fatal limit of these particular drugs, you have created a reasonable doubt that this person could have died from other things. Right. They could have died from the knee or they could have died from the drugs.”

Chauvin will lose decades, if not the rest of his life, in prison because the jury – who were never sequestered – felt that Chauvin caused Floyd’s death and not the fatal amount of fentanyl in his system.

Marmee Rooke, The Tatum Report
Marmee has been around grassroots politics all of her life. Being a stay-at-home mom, she knew she had a voice that needed to be heard. She is raising the next generation while fighting for her own.
Cori Bush Calls Women "Birthing People"
AOC is "Happy" to be a Planned Parenthood Baby
Disabled Farmer Denied Aid Sues Biden Administration for 'Racist' Relief Plan
Biden Travels Over 1M Miles on Amtrak, In His Mind
Fauci's Institute Paid $430K for Experiments with Aborted Tissue
See more...
Advertisement

If you forgot, or maybe weren’t even alive during the 1980s, there was a nuclear reactor station in Ukraine called Chernobyl. On April 26, 1986, a surge of power took out […]

Several demonstrators took to the streets outside a Wells Fargo bank branch on Friday in Washington DC to protest the company’s role in funding an oil pipeline company, Enbridge Inc. […]

OPINION| The opinions expressed in this article are that of the writer, and may not necessarily reflect those of Tatum Report LLC Marmee Rooke AOC wasn’t the only Democrat that […]

AOC is "Happy" to be a Planned Parenthood Baby

Steve Pomper OPINION| The opinions expressed in this article are that of the writer, and may not necessarily reflect those of Tatum Report LLC After the city I served in […]

"Ponies" Are Not the Main Focus This Derby Day

Derby City attempted to wade back into normalcy Saturday with a regularly scheduled running of the 147th Kentucky Derby. The first Saturday in May has long taxed the city’s police […]

Riiver Nihil A federal grand jury has indicted all four officers involved in the George Floyd case. According to the indictment documents unsealed today, all four men have been accused of […]

Twitter Adds New Feature to 'Help' Users With Their Tweets

Darius Ricks Unless you’ve been hiding under a rock, you’ll know that Twitter and Facebook have been escalating their efforts to censorship users. Twitter and CEO Jack Dorsey have given […]

Is "Foxitis" the New Chewbacca Defense?

It was a total circus in a Washington courtroom Thursday as several defendants were on trial for their involvement in the Capitol riots on January 6. Many of the people […]

A Wisconsin dairy farmer is reportedly suing the Biden administration by joining the lawsuit in Green Bay last week that argues racial discrimination against ‘whites’ in the federal aid program. […]