Growing up after the 9/11 terrorist attacks felt a lot like surviving multiple psyops created by the federal government. Our generation had access to the internet for the first time and yet couldn’t get our government to tell us exactly who was to blame for the terrorism that claimed almost 3,000 Americans on 9/11.

In reports released in 2020, foreign publications reported that the FBI “mistakenly” identified one of the potential backers of the attacks. Mussaed Ahmed al-Jarrah was “assigned to the Saudi embassy in Washington, DC in 1999 and 2000,” according to the Tasnim News Agency (TNA).

TNA reported that “the authorities believe that Al-Jarrah instructed two people – Fahad al-Thumairy, a cleric, and Omar al-Bayoumi, a suspect Saudi agent – to help two of the hijackers settle in the US in January 2000 ahead of the attacks.”

In a 2019 report by the Middle East Monitor (MEMO), a familiar name was found to be among the Americans allegedly helping the Saudi government cover up their responsibility in the attacks on September 11.

“In a series of allegations that is likely to pile more pressure on the US Justice Department to release redacted sections of the Congressional Inquiry into the attacks that [are] said to contain evidence of Saudi Arabia’s substantial involvement in the execution of the terror plot, Special Counsel Robert Mueller has been accused of helping the Saudis cover up their role in the 9/11 attack,” the report stated.

According to NY Post writer Paul Sperry, Robert Mueller – who is infamous in Conservative circles for pushing the now-debunked Russian Collusion Hoax- actively “threw up roadblocks in the path of his own investigators working the 9/11 case, while making it easier for Saudi suspects to escape questioning.” 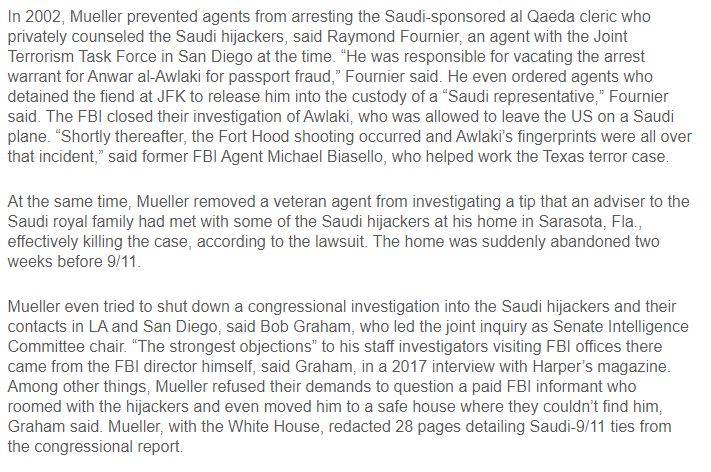 According to the NY Post report, some agents were willing to give Mueller a pass on helping those responsible for the terrorist attacks on 9/11. They said that Mueller was following orders from the White House. Agent Mark Rossini even remarked, “I can still see that photo of Bandar and Bush enjoying cigars on the balcony of the White House two days after 9/11.”

But not all agents were so forgiving. When 9/11 happened, almost 3,000 Americans died, and most people remember the way they felt that day as they watched people jumping out the windows as the towers fell.

Among those not willing to give Mueller an inch was a former US counterintelligence official who told the NY Post back in 2019, “The bottom line is, Mueller did not do an investigation on people involved in the 9/11 attacks who were connected to the Saudi government.”

“Maybe if they were Russians, he would be interested. But he was not interested in investigating terrorists who murdered Americans,” the official said.

Marmee Rooke, The Tatum Report
Marmee has been around grassroots politics all of her life. Being a stay-at-home mom, she knew she had a voice that needed to be heard. She is raising the next generation while fighting for her own. Email : marmee@tatumreport.com
FDA Officials Come Out Against Covid Booster as Dems Create Path for Vaccine Passports
Ohio Mayor Tells School Board They are Guilty of Distributing Child Pornography
President Biden's Microphone Cuts Off AGAIN while Blinken Denies that Ever Happened
Recall Results Show California Wants Newsom to Keep the State Exactly the Same
WATCH: Representatives Want Blinken to Admit Afghanistan Withdrawal was Flawed
See more...
Advertisement