The San Pedro Bay Pipeline remains shut down until further notice after a corrective order was issued by the US Department of Transportation Pipeline and Hazardous Materials Safety Administration on Monday.

Preliminary reports have determined that the oil spill, occurring offshore in Huntington Beach, was from a ship’s anchor that hooked the pipeline and dragged it over 100 feet from its original position—creating a 13-inch tear.

The company that runs the pipeline, Amplify Energy Corp., is under fire for failing to report the accident in a timely manner, which may have contributed to a much larger clean-up than necessary.

The order forces Amplify to keep the pipeline shut down until they are able to meet the department’s requirements and was signed by Alan K. Mayberry, the Associate Administrator for Pipeline Safety.

“After evaluating the foregoing preliminary findings of fact, and having considered the characteristics of the pipeline, including its location offshore, the hazardous nature of the material (crude oil) transported, the uncertainty as to the root cause(s) of the Accident, the uncertainty of the failure location, the sensitive environmental areas in the vicinity of the pipeline, the ongoing impacts to marine and wildlife, and risk of additional, related accidents, I find that continued operation of the pipeline without corrective measures is or would be hazardous to life, property, or the environment, and that failure to issue this Order expeditiously would result in the likelihood of serious harm.”

The report includes specific instructions that the company must follow in order to restart the over forty-year-old pipeline. 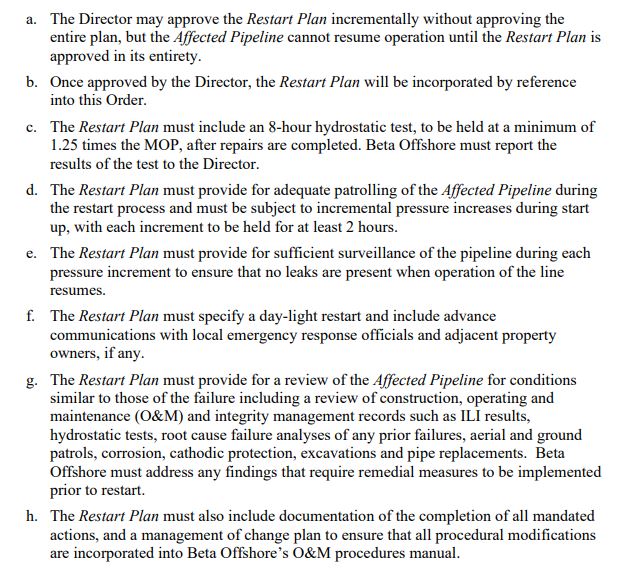 A “Restart Plan” will be required, among other safety protocols, including extensive investigation and testing of the entire pipeline and its operations. They will be required to reevaluate their emergency training program, including its effectiveness.

According to the report, “the San Pedro Bay Pipeline traverses a High Consequence Area (HCA) as defined in 49 CFR § 195.450 and an ecologically unusually sensitive area as defined in § 195.6.”

Beaches have already been closed and will likely be closed for weeks or even months, with the local fishing economy taking a major hit.

Preliminary investigations have revealed the partial tear is approximately 5 miles offshore at a depth of approximately 98 feet. Fifteen of the pipeline’s 17-mile stretch is underwater.

The company was first notified of a potential failure by their low-pressure alarm system at 2:30a PDT but didn’t shut down the pipeline until 6:01a. It took them another 3 hours to notify federal authorities.

WARNING: Some Language in the article and video below may not be suitable for all audiences A dramatic…

Juveniles Break Out of Detention Center, One Still at Large