WARNING: Language/Sexual Conversation   Some of the following language and context of this article may not be suitable for some audiences.

One picture stored on his laptop is a meme of his father Joe hugging Obama, asking to be able to call Obama a ‘n***a’ “just this once.”

The conversation that happened in December 2018 paints another troubled picture of the President’s son. Hunter Biden used the racial slur, ‘n***a,’ multiple times in the exchange with Mesires. Biden asked his lawyer, “How much money do I owe you? Because n***a, you better not be charging me Hennessy rates.”

George Mesires replied, “That made me snarf my coffee.” Mesires calls Hunter a “clever son of a gun” after Hunter proudly takes credit for creating the “Hennessy rate” comment. The conversation is as random as it is inappropriate.

At one point, Hunter Biden apologizes for accidentally “sexting” his lawyer a naked picture of himself meant “for another friend named Georgia.” From outside appearances, the image didn’t faze Mesires. Instead of being shocked that his client is “sexting” him, Mesires responded, “Why are you so tan?”

The picture in question was not found on the device. 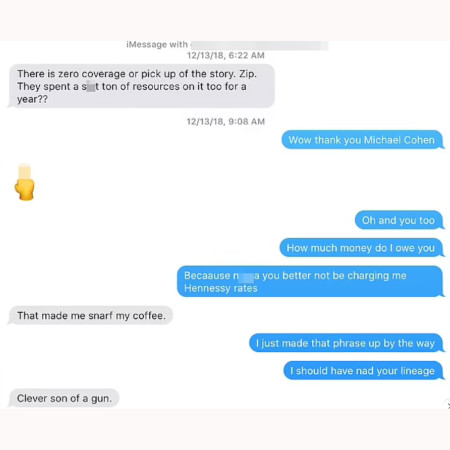 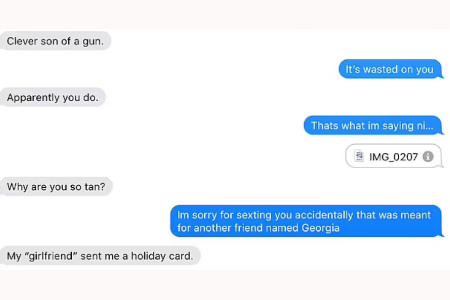 It seems that George Mesires eventually tired of Hunter Biden’s need to inject sexual innuendos and race into their conversations. Hunter seemed to be in yet another crisis of consciousness in one exchange and asked Mesires to explain how to receive unconditional love.

Hunter responded, showing his true feelings about religion, which validates a significant criticism from Republicans of Biden’s claim to be a “devout Catholic.” Hunter’s response to Mesires’ comments about God’s unconditional love started with a slur and ended with saying that God is “fictional.”

Hunter wrote, “OMG n***a. Did you just [use] a fictional character from the imagination of the collective frightened and my dead brother’s unconditional love is what I should rely on, and my kids aren’t children, George.”

Mesires, attempting to keep the conversation on track, glosses over the comments saying, “My parents’ love was conditioned. That’s why we are searching. And we will always be searching.” Hunter’s responses are likened to what you would read from a teenager obsessed with the appendage between his legs. Hunter’s sexual deviance is well documented.

Hunter wrote,” My penis as of late has been unconditional.” “For my penis?” “Its [a] big penis, George.” “They always find it.” “And I only love you because you’re black.”

Mesires responded, “It’s so annoying when you interject with frivolity.”

In the midst of Hunter's N-word-laden texts to his lawyer, everyone seems to have missed that Hunter refers to God as "a fictional character from the imagination of the collective frightened." Joe Biden, the supposed Catholic, is an utter phony. pic.twitter.com/zJO4Y9Lau2

The Daily Mail reported that George Mesires charged Hunter Biden an “hourly rate of $845.” The rate came to light through a “bill to Hunter’s business partner Mervyn Yan, involved in his infamous deal with Chinese oil giant CEFC.”

Hunter Biden’s laptop will continue to prove a nuisance to the Biden administration. However, because he is the son of a Democrat President and not Donald Trump’s son, the conversation will be laughed off and explained away.

Marmee Rooke, The Tatum Report
Marmee has been around grassroots politics all of her life. Being a stay-at-home mom, she knew she had a voice that needed to be heard. She is raising the next generation while fighting for her own. Email : marmee@tatumreport.com
Tucson Police Officer Danny Leon Takes Down Violent Gunman [VIDEO]
Facebook Took Down Profile at Hunter Biden's Request Says New Claim
Five Texas Democrats Who Flew to D.C. Test Positive For COVID
Lawsuit Filed In Georgia Claims 2020 Senate Election Results Should Be Contested
NFL Will Play Black National Anthem BEFORE The Star-Spangled Banner
See more...
Advertisement