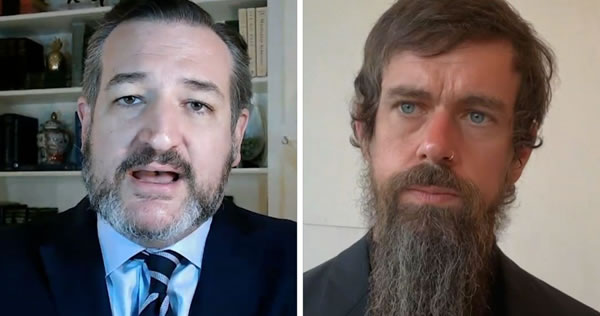 “Facebook and Twitter and Google have massive power. They have a monopoly on public discourse in the online arena.”

“It’s dismaying listening to the questions from our Democratic colleagues, because consistently the message from Senate Democrats is for Facebook and Twitter and Google to censor more. To abuse their power more. To silence voices that Senate Democrats disagree with – more. That is very dangerous if we want to maintain a free and fair democracy.”

“Are you an expert in voter fraud?” asked Cruz.

“No I’m not,” responded Dorsey.

“Well why, then, is Twitter right now putting purported warnings on virtually any statement about voter fraud?”

“We’re simply linking to a broader conversation so that people have more information.”

“No you’re not. You put up a page saying, quote, ‘voter fraud of any kind is exceedingly rare in the United States’. That’s not linking to a broader conversation, that’s taking a disputed policy position, and you’re a publisher when you’re doing that. You’re entitled to take a policy position, but you don’t get to pretend you’re not a publisher and get a special benefit under Section 230 as a result.”

“That link is pointing to a broader conversation with tweets from publishers and people all around the country,” responded the Twitter CEO.

“I imagine that we would label it,” said Dorsey.

“How about this … ‘voter fraud is particularly possible where, quote, third-party organizations, candidates, and political party activists are involved in, quote, handling absentee ballots.’ Would you flag that as potentially misleading?”

“I don’t know the specifics of how we might enforce that, but I imagine a lot of these would have a label pointing people to a bigger conversation,” said Dorsey.

“Well you’re right, you would label them, because you’ve taken the political position right now that voter fraud doesn’t exist. I would note both of those quotes come from the Carter-Baker Commission on Federal Election Reform, that is Democratic President Jimmy Carter and former Secretary of State James Baker, and Twitter’s position is, essentially, voter fraud does not exist.”

“Are you aware that just two weeks ago in the state of Texas, a woman was charged with one-hundred and thirty-four counts of election fraud, are you aware of that?”

Dorsey said he was not aware of it.

Get the latest breaking news straight into your inbox