U.K. Teen Raises $39,000 For Charities During The Pandemic

While many people became disheartened due to the pandemic, 18-year-old Sebbie Hall decided that he would make the most of his newfound time at home.

Not just for himself, either.

You see, Sebbie has learning difficulties and a rare chromosome anomaly. He was also told he’d never walk nor talk, so the fact that he was able to raise around £28,000 ($39,000) simply from asking and performing acts of kindness for his community is even more astonishing.

He’s done this since the start of the pandemic, starting with giving his friend an iPad so they could Zoom.

His mother, Ashley, said, “He bought this friend a device at the end of the 10 days, but because he enjoyed watching other people smile, he then wanted to continue.”

After his mom asked him how else he could raise money to help others, Sebbie began with 10 sponsored acts of kindness every single day for 10 days to raise £1k for charities.

Thus began his now over one-year-long kindness marathon, and what he has accomplished in this time is incredible.

Sebbie has performed over 1,600 acts of kindness since the iPad, which is truly a feat.

“It’s hard for any young person to go up to random strangers and speak to them, and even harder for Sebbie because he finds it really hard to find words himself,” his mother explained. “But he somehow found this inner strength of being kind.”

Sebbie pulled out all the stops and performed a wide variety of tasks, just out of pure kindness. Raising money to donate to local charities and great causes became an additional layer of joy.

He has watered gardens, walked pets, handed out PPE, posted mail for isolating locals, washed a boat and cars, and baked cakes for nurses.

He collected unwanted Halloween pumpkins, turning them into soup and pies for needy people, and gave warm coats to the homeless.

He gave 100 roses to 100 women to make them smile and assisted at food banks.

Sebbie used the $39,000 in unexpected donations to provide adapted IT devices to 300 families, sponsor a disability rugby team, and pay for three IT suites for kids to use to find work.

There was also plenty of money to buy a communication kit for kids at four specialist schools and set up a disability arts hub.

Let’s also not forget that he donned an Easter Bunny costume to hand out 365 donated Easter eggs to random houses.

Last December, he also left made-up secret Santa bags on the doorsteps of 80 houses. And how about the poems Sebbie’s written for friends and the toiletries he delivered to a women’s refuge.

He now is running two miles every day to raise money to set up physical therapy suites.

Sebbie sees himself just like the community does: a superhero making a difference. “Kindness is my superpower. I’m not stopping. I want to raise more money and make people more happy,” said Sebbie. 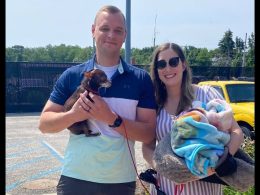 Many people who abandon dogs simply let them go and refuse to take them back. Some dump their… Deputy Lifts SUV To Save A Woman’s Life

Riiver Nihil A Gloucester County Sheriff’s Deputy found himself in the right place at the right time. Deputy… 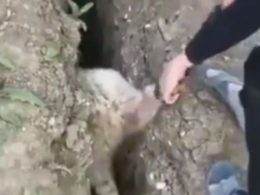 Jesus told us he is the Good Shepherd, so we are his flock of smelly, stupid sheep. Maybe… 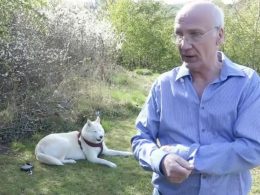 On Thursday evening, Terry Walsh and his Siberian husky, Hel, were out for a walk in Birmingham, England.…
Total
1
Share