Video Shows Antifa Smash Man’s Truck, Pepper Spray Him, Then He Pulls Out His Gun

Antifa outlaws appeared to suddenly welcome and even cooperate with police only seconds after a fed-up citizen pulled a gun on them. Maybe those in power can learn something from it.

On Sunday, patriots held a “Freedom Rally” in the area of the Oregon State Capitol in Salem to “flag wave to honor those who fought for our freedoms,” The Oregonian reported.

Unfortunately, participants were attacked and harassed by a 200-strong group of antifa counterdemonstrators whom police described as “heavily armed.”

The confrontations led to four arrests, according to Salem police — but not for the man that The Oregonian claimed had “brandished a gun.”

Video footage showed the unidentified man pulling a pistol from his waistband and cocking it in front of violent radicals who were attacking his vehicle after they apparently pepper-sprayed him.

Using their usual tactics of destruction and harassment, the antifa punks spent the day hurling paint-filled balloons at passing vehicles, shining lasers in driver’s eyes and breaking out the windows of caravaning patriots who were flying American flags and other banners with messages expressing support for police and former President Donald Trump.

The man who pulled the gun on the mob appeared to be just another patriot-turned-victim — until the moment he flipped the script.

He emerged from the driver’s side and calmly stood behind his truck to address the mob, his body language suggesting he was asking them to simply back off.

But several people dressed in black with gas masks around their necks and pepper-spray cans, homemade shields, clubs and other tools of mayhem in their hands closed in on the man and his vehicle while taunting and shouting expletives at him.

As he was about to return to the driver’s side door, someone smashed the small rear passenger window.

When the man came back around to inspect the damage with his back to the crowd, he suddenly flinched, seemingly because he was pepper-sprayed or had something thrown at him.

It was then that he pulled the weapon from his waistband and cocked it.

“Get away from me!” he yelled with the pistol in his hand but down at his side.

WARNING: The following video contains graphic language that some viewers will find offensive.

The thugs finally began to back up. As the man crossed behind the truck, a police officer appeared and commanded the man to put the gun down.

He calmly placed it in the bed of his truck as he obeyed police orders to get on the ground, causing the antifa crowd to suddenly regain its bravado to shout expletives at the now-disarmed driver.

“Shouldn’t be pulling a gun out,” one scolded. “And he loaded it too.”

“It’s a loaded gun,” someone offered to the police. “He cocked that s— and pointed it at us,” a man incorrectly told the officer (the only time the barrel of the gun was pointed their way was when he was arming the weapon).

Another angle from the incident seemed to show that they had attempted to pepper-spray the man when he first got out of his vehicle, and also that he made a hand gesture possibly indicating to a passing car to call the police before he even took out his weapon.

It also showed the older gentleman on the ground wiping his eyes, which supports the idea that he had been pepper-sprayed.

Independent Media PDX tweeted of the incident and captioned it, “Altercation happens between anti-fascist protesters and a ‘back the blue’ counter-protester. A gun is then pulled on protesters before he is arrested.”

Altercation happens between anti-fascist protesters and a “back the blue” counter-protester. A gun is then pulled on protesters before he is arrested. #Salem #Portland #Protest pic.twitter.com/Woo0SiZw6r

The Salem Police Department issued a news release on Monday seeking to “clarify misinformation” about the events the day before, including the gun incident.

“He did not point the weapon at anyone and dropped it when ordered to do so by Law Enforcement. This person has a valid concealed handgun license. This person was detained, interviewed and then released.”

Updated and clarifying information from the March 28, 2021 protests at the Oregon State Capitol- https://t.co/wUftv6VMhB pic.twitter.com/q2hUZX1NxE

That supports what was shown in the videos: The man was not threatening the mob with his weapon, as The Oregonian had characterized it.

Rather, he was simply trying to deter an armed band of thugs from taking further action against him and his property.

Traffic was heavy in that area, so the man had to decide whether to sit there in his vehicle and take whatever the mob decided to dish out, or stand up for himself and his property. He chose the latter.

It’s certainly a good thing for everyone involved that police showed up when they did, but scenes like this should never be permitted in the first place.

Oregon has a massive problem with antifa violence but doesn’t seem to want to take any serious measures to stop it, and this brazen band of thugs is proof that nobody was too concerned about getting caught.

Meanwhile, these anarchist cowards were quick to back away and cry for police help when they felt threatened by one old guy with a gun. Maybe the powers that be should take that as a lesson in how to deal with this problem.

It might require some intestinal fortitude, but groups of marauding vandals out for destruction and sometimes for blood should be met by serious countermeasures.

Instead, law enforcement is often disarmed and made to stand down as antifa groups are permitted to go on terrorizing the public however and whenever they please.

The man who pulled out his weapon to protect himself was doing what local, state and federal authorities apparently aren’t willing or able to do.

It’s sometimes hard to believe that scenes like this are happening in America, but they most certainly are — and nobody in power seems to even have the will to make it stop. 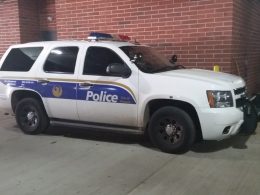 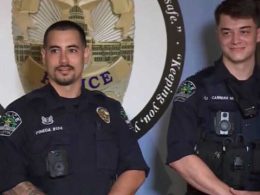 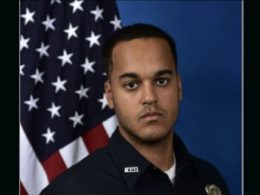 Updated 04/28/21 3:59 PM:  Officer Seward was taken off of desk duty and given back policing powers. A substantial…